Barbara Anne Castle, Baroness Castle of Blackburn (1910 – 2002). British Labour Party politician and Member of Parliament for Blackburn from 1945 to 1979.

- "Barbara, the youngest of the handful of women MPs elected in 1945 was marked out by her slightness and above all by her flaming red hair" http://www.bbc.com/news/uk-politics-11149803

- "She was lefter than thou yet from a public school, Oxford, and championed radical causes in the 1930s. That together with her red hair invited the sobriquet ‘The Red Queen.’ http://blogs.usyd.edu.au/…/the_red_queen_barbara_castle.html 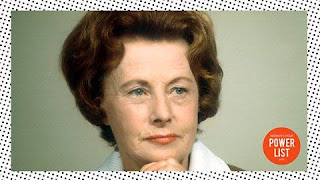