Abd-ar-Rahman III (889/91 – 961). Emir and Caliph of Córdoba of the Umayyad dynasty in al-Andalus.
He was born in Córdoba, the grandson of Abdullah ibn Muhammad al-Umawi, seventh independent Umayyad emir of al-Andalus. His parents were Abdullah's son Muhammad and Muzna (or Muzayna), a Christian concubine. His paternal grandmother was also a Christian, the royal infanta Onneca Fortúnez, daughter of the captive king Fortún Garcés of Pamplona. Abd al-Rahman was thus nephew in the half-blood of queen Toda of Pamplona. He is described as having "white skin, blue eyes and attractive face; good looking, although somewhat sturdy and stout. His legs were short, to the point that the stirrups of his saddle were mounted just one palm under it. When mounted, he looked tall, but on his feet he was quite short. He dyed his beard black."

- "He had fair skin, blue eyes and reddish hair, which he used to dye black in order to look more Arabic."
http://www.spainthenandnow.com/spanish-history/10th-c-al-andalus-abd-al-rahman-iii

- "Because of his lineage, Abd al-Rahman III had inherited blue eyes and reddish-blond hair, which he was said to have dyed black." https://books.google.it/ 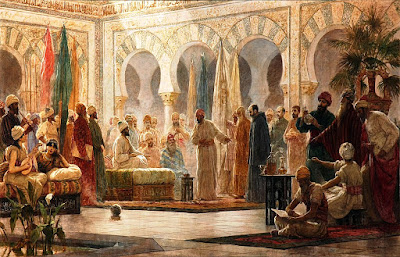 (Abd ar-Rahman III and his court
by Dionisio Baixeras Verdaguer)