Hede Massing, née "Hedwig Tune" (also "Hede Eisler," "Hede Gumperz," and "Redhead") (1900 – 1981). Austrian actress in Vienna and Berlin, communist, and Soviet intelligence operative in Europe and the United States during the 1930s and 1940s. After World War II, she defected from the Soviet underground.

- "My father was a handsome man. I inherited from him only his height, his reddish curly hair, and, alas!, probably some of his less attractive character traits." http://spartacus-educational.com/Hede_Massing.htm

- "Massing, who appears in the Vassiliev Notebooks under the covername “Redhead"... " http://algerhiss.com/history/whos-who/ 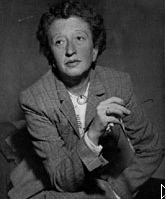