Tycho Brahe (1546 - 1601). Danish nobleman known for his accurate and comprehensive astronomical and planetary observations. Well known in his lifetime as an astronomer, astrologer and alchemist, he has been described as "the first competent mind in modern astronomy to feel ardently the passion for exact empirical facts." His observations were some five times more accurate than the best available observations at the time.
After disagreements with the new Danish king, Christian IV, in 1597, he went into exile, and was invited by the Bohemian king and Holy Roman Emperor Rudolph II to Prague, where he became the official imperial astronomer. He built an observatory at Benátky nad Jizerou. There, from 1600 until his death in 1601, he was assisted by Johannes Kepler, who later used Tycho's astronomical data to develop his three laws of planetary motion.

"He must have been a very colourful figure with his red hair, long red mustache and beard, blue eyes and gold nose."


"Tycho Brahe was a man of moderate stature, with light red hair and his countenance rather handsome." 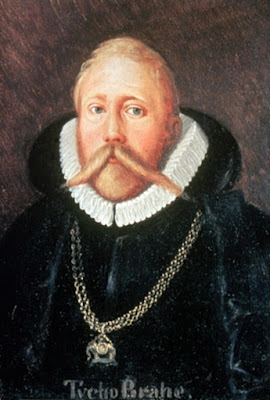