Henry IV ( 1553 – 1610), also known by the epithet "Good King Henry". King of Navarre and King of France from 1589 to 1610. He was the first French monarch of the House of Bourbon, a branch of the Capetian dynasty. Husband of Maria de' Medici and Margaret of Valois. Father of Elisabeth of France.
He was killed by red-haired François Ravaillac.


- "There are red and white hairs on the head and face, but none on the pate. Henry had ginger tresses and goatee but was bald on the top of his head." http://www.thehistoryblog.com/archives/9035 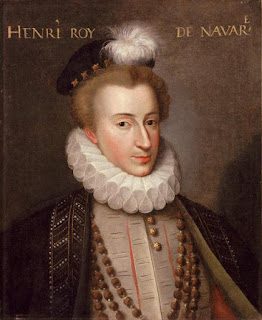