- "She was slim, redheaded, and very good to look at." https://www.riflemanconnors.com/lou_mallory-press_release.h… 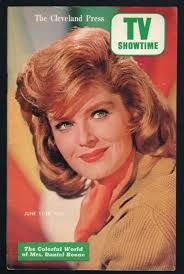