Rutherford Birchard Hayes (1822 –1893). 19th president of the United States from 1877 to 1881. He served also as an American representative and governor of Ohio. Hayes was a lawyer and staunch abolitionist who defended refugee slaves in court proceedings in the antebellum years. During the American Civil War, he was seriously wounded while fighting in the Union Army.

- "... Hayes was a handsome fellow with red hair and blue eyes and had been a popular general in the Civil War..."  https://books.google.it/books…


- "The auburn hair of his youth turned a dark brown and then white."  http://presidentialham.com/category/u-s-presidents/page/3/ 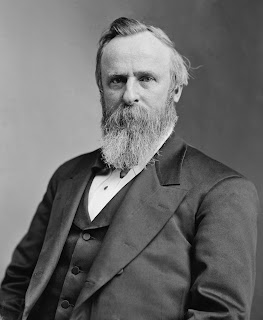