Nikolai Ivanovich Bukharin ( 1888 – 1938). Bolshevik revolutionary, Soviet Union politician and prolific author on revolutionary theory.
As a young man, he spent six years in exile working closely with fellow exiles Vladimir Lenin and Leon Trotsky. After the revolution of February 1917, he returned to Moscow, where his Bolshevik credentials earned him a high rank in the Bolshevik party and after the October Revolution became editor of the party newspaper Pravda.
When the Great Purge began in 1936, Stalin looked for any pretext to liquidate his former allies and rivals for power and some of Bukharin's letters, conversations and tapped phone-calls indicated disloyalty. Arrested in February 1937, he was charged with conspiring to overthrow the Soviet state. After a show trial that alienated many Western communist sympathisers, he was executed in March 1938.

- "His hair is gray, with wisps of the original red. Periodically he paces his cell, then returns to his task."  https://www.hoover.org/research/martyred-communism 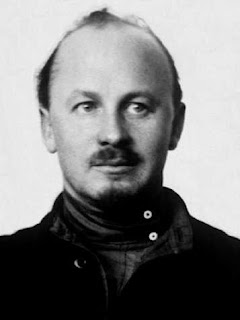