William Dunlop (1792 – 1848) also known as Tiger Dunlop. Scottish army officer, surgeon, Canada Company official, author, justice of the peace, militia officer, politician, and office holder. He is notable for his contributions to the War of 1812 in Canada and his work in the Canada Company, helping to develop and populate a large part of Southern Ontario (the Huron Tract). He was later elected as a Member of Parliament for the 1st Parliament of the Province of Canada, Canada West, Huron.

- "The Tiger was red-faced, red-haired and fiery-tempered."  https://books.google.it/books…

- "Tiger was a remarkable man with fiery red hair and a gargantuan appetite for whisky and tall tales."  http://www.inverclydesheritage.co.uk/william-tiger-dunlop/

- "More than a shock of bushy red hair made Tiger Dunlop one of early Ontario’s most colourful characters."  https://thesarniajournal.ca/colourful-tiger-dunlops-book-h…/ 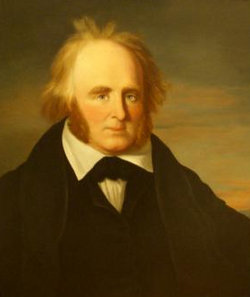