Nancy Morgan Hart (c. 1735–1830). Rebel heroine of the American Revolutionary War noted for her exploits against Loyalists in the northeast Georgia backcountry. She is characterized as a tough, resourceful frontier woman who repeatedly outsmarted Tory soldiers, and killed some outright. Stories about her are mostly unsupported by contemporary documentation, and it has been impossible for researchers to entirely distinguish fact from folklore.

- "She was rough-hewn and rawboned, with red hair and a face scarred by smallpox."  https://en.wikipedia.org/wiki/Nancy_Hart

- "She grew up to be a very tall, muscular woman with red hair, blue eyes and a smallpox-scarred face."  http://www.womenhistoryblog.com/20…/…/nancy-morgan-hart.html

- "One of the most colorful was Nancy Morgan Hart, an unspeakably picturesque woman who stood six feet tall with a shock of red hair..."  https://books.google.it/books… 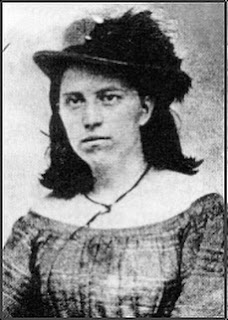