Ada Rehan (c. 1857 – 1916). Irish-born American actress and comedian who typified the "personality" style of acting in the nineteenth century.
She was born Bridget Crehan in County Limerick, Ireland, one of five siblings. The family surname was apparently changed to Rehan later. When she was a small child her family emigrated to the United States and settled in Brooklyn, New York.
Rehan was performing in one of Daly's own plays, Pique, when the successful theater manager Augustin Daly first took note of her in April 1879. Later that year when he opened his third New York theatre, Daly's Fifth Avenue Theatre, Rehan joined his company. Rehan would continue to work with Daly until his death twenty years later.
Rehan was part of Daly's company known as the "Big Four". John Drew, Jr., Mrs. Ann Hartley Gilbert, and James Lewis made the rest of the group.
Rehan was so popular in the 1880s and '90s that she played over 200 parts. George Bernard Shaw, Mark Twain, and Oscar Wilde (who wrote the part of Mrs. Erlynne in Lady Windermere's Fan with her in mind) were among her many admirers. And women everywhere strove to imitate her diction, demeanor, and even her dresses. The Chicago Evening Mail reported on the fad of women impersonating Rehan's speech, ladies' hats were named for her, and dressmakers offered her costumes for free in order to get their designs in front of the public.

- "Tall and graceful, with fluffy reddish hair and many freckles, Ada fascinated Dora, who appreciated her kindness and admired her as "the best actress in the whole company." https://digitalcommons.lsu.edu/cgi/viewcontent.cgi…

- "Miss Rehan wore a robe of golden silk, and her noble, alert head was crowned with an aureole of red hair."  https://archive.org/…/adar…/adarehanstudy00wintrich_djvu.txt

- "According to contemporaries, she was a striking figure - tall in stature, with classical facial features, long, thick, reddish hair..."  https://books.google.it/books… 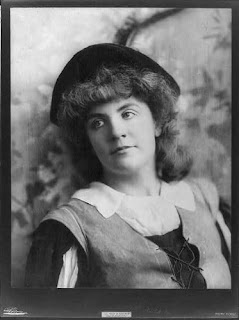 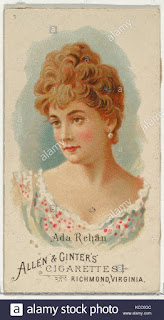