George Herbert Putnam (1861 – 1955). American librarian. He was the eighth (and also the longest-serving) Librarian of Congress from 1899 to 1939. He implemented his vision of a universal collection with strengths in every language, especially from Europe and Latin America.
His father, George Palmer Putnam, was the founder of a well known publishing house, known previously as the Putnam Publishing house, but now known as G. P. Putnam's Sons.

- "Putnam was a small, vital red-haired man, with a bristling mustache, who was repeatedly referred to by his contemporaries as a patrician."  https://books.google.it/books…

- "He was a small man with thinning red hair and an abundant mustache."  https://books.google.it/books… 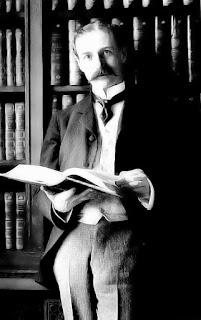