George Brinton McClellan (1826 – 1885). American soldier, civil engineer, railroad executive, and politician. A graduate of West Point, McClellan served with distinction during the Mexican–American War , and later left the Army to work in railroads until the outbreak of the American Civil War. Early in the war, McClellan was appointed to the rank of major general and played an important role in raising a well-trained and organized army, which would become the Army of the Potomac in the Eastern Theater; he served a brief period (November 1861 to March 1862) as general-in-chief of the Union Army.
The Army adopted McClellan's cavalry manual and also his design for a saddle, dubbed the McClellan Saddle, which he claimed to have seen used by Hussars in Prussia and Hungary. It became standard issue for as long as the U.S. horse cavalry existed and is still used for ceremonies.
General McClellan failed to maintain the trust of President Abraham Lincoln. He did not trust his commander-in-chief and was privately derisive of him. McClellan was removed from command in November after failing to decisively pursue Lee's Army following the tactically inconclusive but strategic Union victory at the Battle of Antietam outside Sharpsburg, Maryland, and never received another field command.
He served as the 24th Governor of New Jersey from 1878 to 1881, and eventually became a writer, and vigorously defended his Civil War conduct.
Most modern authorities have assessed McClellan as a poor battlefield general. Some historians view him as a highly capable commander whose reputation suffered unfairly at the hands of pro-Lincoln partisans who made him a scapegoat for the Union's military setbacks. After the war, subsequent commanding general and 18th President Ulysses S. Grant was asked for his opinion of McClellan as a general; he replied, "McClellan is to me one of the mysteries of the war."

- "McClellan had red hair and a mustache."  https://www.kibin.com/…/account-of-the-life-of-general-mccl… 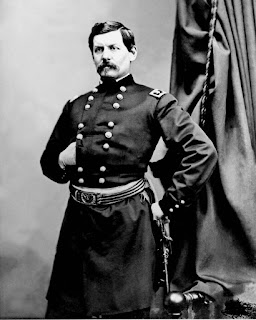