John Hunt Morgan (1825 – 1864). Confederate general in the American Civil War.
In April 1862, he raised the 2nd Kentucky Cavalry Regiment, fought at Shiloh, and then launched a costly raid in Kentucky, which encouraged Braxton Bragg's invasion of that state. He also attacked the supply-lines of General William Rosecrans. In July 1863, he set out on a 1,000-mile raid into Indiana and Ohio, taking hundreds of prisoners. But after most of his men had been intercepted by Union gunboats, Morgan surrendered at Salineville, Ohio, the northernmost point ever reached by uniformed Confederates. The legendary "Morgan's Raid", which had been carried out against orders, gained no tactical advantage for the Confederacy, while the loss of his regiment proved a serious setback.
Morgan escaped from his Union prison but his credibility was low, and he was restricted to minor operations. He was killed at Greeneville, Tennessee, in September 1864. Morgan was the brother-in-law of Confederate general Ambrose Powell Hill.

- "Notably, history books about Morgan state that he rode into Greenville with his auburn hair and beard dyed black."  http://plantingtrees.blogspot.com/…/john-hunt-morgan-and-tw… 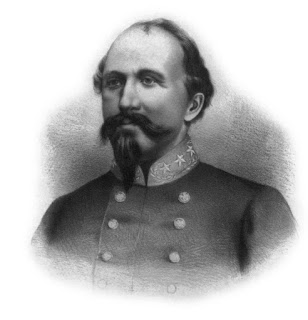