Jessie Ann Benton Frémont (1824 – 1902). American writer and political activist.
Frémont's initial notability came from her family: she was the daughter of Missouri Senator Thomas Hart Benton and the wife of military officer, explorer and politician, John C. Frémont. She wrote many stories that were printed in popular magazines of the time as well as several books of historical value. Her writings, which helped support her family during times of financial difficulty, were memoirs of her husband's, and her own, time in the American West—back when the West was an exotic frontier.

- "On a visit home, the willful brown-eyed girl seized the scissors, cut her wavy auburn hair and announced to her father she would not return."  https://books.google.it/books…

- "She had an oval face even described as being classic, dark eyes, knockout red hair."  http://www.thetracyfamilyhistory.net/Cn_57_Jessie.htm

- "Dressed often in a pink frock, her bright auburn hair cascading around her shoulders..."  https://books.google.it/books… 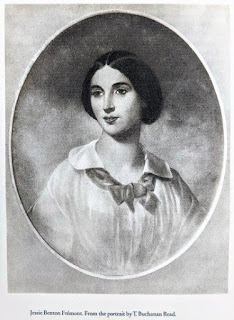