Francis Preston Blair Jr. (1821 – 1875). American jurist, politician and soldier. He represented Missouri in both the House of Representatives and the Senate, and was active in preventing the state of Missouri from being absorbed into the Confederacy at the beginning of the Civil War.
Blair was instrumental in appointing Nathaniel Lyon as the new military commander of the Western Department of the U.S. Army. He assisted Lyon in securing help of the St. Louis' Home Guard in moving over 20,000 rifles and muskets from the St. Louis Arsenal to Illinois. Missouri secessionists considered this event as breaking of informal truce established in the state. This set the scene for the Camp Jackson Affair and continuing guerrilla activity by outraged pro-slavery elements. In 1862, Blair joined the Missouri volunteers, being promoted major general, commanded a division at Vicksburg under Sherman, took part in Sherman's March to the Sea and ended the war as a corps commander.
He suffered a paralyzing stroke in 1872, but continued to be active in state politics until his death. 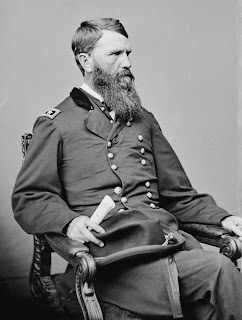