William Selby Harney (1800 – 1889). Tennessee-born cavalry officer in the U.S. Army, who became known (and controversial) during the Indian Wars and the Mexican–American War. One of four general officers in the U.S. Army at the beginning of the Civil War, he was removed from overseeing the Department of the West due to his Confederate sympathies early in the war (although he did keep Missouri from joining the Confederacy). Under President Andrew Johnson, he served with on the Indian Peace Commission, negotiating several treaties.
Among his relatives there was the songwriter, entertainer, and pioneer of ragtime music Ben Harney.

- Along the way, the red-haired cavalry officer, in charge of loyal troops..."  https://books.google.it/books…

- "... Twigg's second-in-command had a temper as fiery as the blaze of red hair that framed his fierce-looking face."  https://books.google.it/books…

- "The tall leader whose red hair shines so brightly at the head of the canoe expedition is Lt. Col. William Selby Harney..."  http://digitalcollections.fiu.edu/teques…/…/1949/49_1_05.pdf

- "His temper was as fiery as his flaming red hair, and although brutal on the field of battle, his imaginative and conscientious leadership helped to shape the character of the Regiment." https://www.warofrightsforum.com/arch…/index.php/t-1201.html 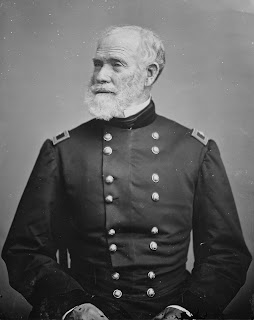