Benjamin Robertson "Ben" Harney (1872 – 1938). American songwriter, entertainer, and pioneer of ragtime music. His 1895 composition "You've Been a Good Old Wagon but You Done Broke Down" is regarded as among the earliest, if not the earliest, ragtime composition. Though now probably more associated with Scott Joplin, in 1924 the New York Times wrote that Ben Harney "probably did more to popularize ragtime than any other person." Time Magazine termed him "Ragtime's Father" in 1938.
His grandfather was John Hopkins Harney, the first mathematics professor at Indiana University and author of the first algebra textbook ever published in the United States. His uncle William Wallace Harney was a renowned journalist and author and he counted two prominent U.S. generals as distant cousins: Lew Wallace and William Selby Harney.

- "All photographic and contemporary accounts show that Harney was light skinned with red hair."  https://en.wikipedia.org/wiki/Ben_Harney

- "His son, Ben R. Harney is known to have had red hair and blue eyes."  https://sites.rootsweb.com/~harney2/Ben_R.htm

- "It was said that the red-haired youth sang out with a husky voice..."  http://www.ragpiano.com/comps/bharney.shtml 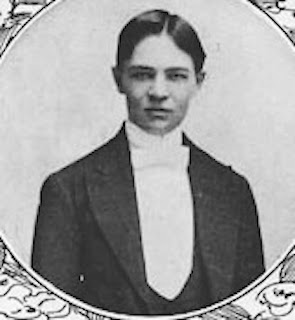