Jim Baker (1818–1898). American frontiersman, trapper, hunter, fur trader, explorer, army scout, interpreter, soldier, territorial militia officer, rancher, mine owner, toll keeper and mountain man. He was a friend of Jim Bridger and Kit Carson and one of General John C. Fremont's favorite scouts.
The decline of the fur trade in the early 1840s drove many the trappers to quit, but Baker remained in the business. Little is known of his movements after 1844, but in 1855 he was hired as chief scout for General William S. Harney of Fort Laramie, and was sent with the U.S. Army to pacify the Mormons in Utah. In 1873 Baker built a cabin with a guard tower near the Colorado Placers of the Little Snake River in Wyoming, where he raised livestock until his death in 1898. His cabin is currently on display at the Little Snake River Museum in Savery, Wyoming. Baker's grave is marked with a stone at Baker Cemetery near Savery, Carbon County, Wyoming.

- "Adopted in 1847 as 'The Red-Haired Shoshone', he dressed in buckskins and moccasinis."  https://books.google.it/books…

- "He is reported to have been tall and lean, in later years wearing a goatee and his reddish hair was allowed to grow long and hang in ringlets."  http://www.mman.us/bakerjim.htm 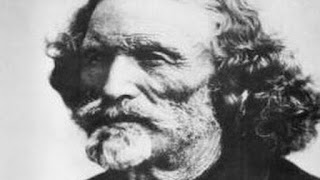