Christopher Houston Carson (1809 – 1868), better known as Kit Carson. American frontiersman. He was a mountain man (fur trapper), wilderness guide, Indian agent, and U.S. Army officer. Carson became a frontier legend in his own lifetime via biographies and news articles. Often exaggerated versions of his exploits were the subject of dime novels. His understated nature belied confirmed reports of his fearlessness, combat skills, tenacity, and profound effect on the westward expansion of the United States.
During the American Civil War, Carson led a regiment of mostly Hispanic volunteers from New Mexico on the side of the Union at the Battle of Valverde in 1862. He was brevetted a Brigadier General and took command of Fort Garland, Colorado. He was there only briefly: poor health forced him to retire from military life.
Among his colleagues there was Jim Baker.

- "I cannot express my surprise at beholding such a small, stoop-shouldered man, with reddish hair, freckled face, soft blue eyes, and nothing to indicate extraordinary courage or daring."  https://en.wikipedia.org/wiki/Kit_Carson

- "Carson was described by his contemporaries as a "small, stooped-shoulder" man with brown to red hair, blue eyes, and a strong but spare frame."  https://simple.wikipedia.org/wiki/Kit_Carson

- "He was very short, approximately 5'4", had red hair and freckles with poor stooped-over posture..."  https://books.google.it/books… 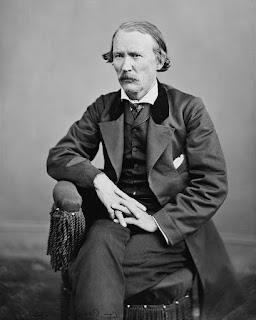