William "Jerry" Henry (1811 - ?). American cooper from Missouri.
In 1844 he escaped slavery, but was arrested in 1851 in Syracuse. The Liberty Party, an abolitionist political party, was holding a state convention in the city, and when news of the arrest spread, several hundred abolitionists broke into the city jail and freed him. The event came to be widely known as the Jerry Rescue. Henry was hidden in Syracuse for several days, then was taken first to the Orson Ames House in Mexico, New York, and then to Oswego, before crossing Lake Ontario and escaping to Canada.

- "He was described as a mulatto, slender, and distinguished by a striking head of red hair."  https://books.google.it/books… 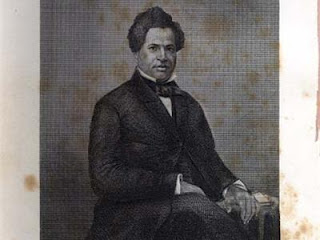