Anna Ella Carroll (1815 – 1894). American politician, pamphleteer and lobbyist. She was born in to a very wealthy and prominent family in her state and city: her great-grandfather was one of the signers of the Declaration of Independence and the last surviving signers and a delegate to the Second Continental Congress and later in the new Congress of the United States. She played a significant role as an adviser to the Lincoln presidential cabinet during the American Civil War (1861-1865). She also wrote many pamphlets criticizing slavery.

- "Anna was a bright, blue-eyed baby with dark red curls and a fair complexion."  https://biography.yourdictionary.com/anna-ella-carroll

- "She shifted the line of her mouth, adjusted the style of her auburn-brown hair, lightened the color of her eyes."  https://www.washingtonpost.com/…/2011/06/03/AGCuI4tH_story.…

- "The red haired attractive Miss Carroll knew many of the political figures of the day..."  https://books.google.it/books… 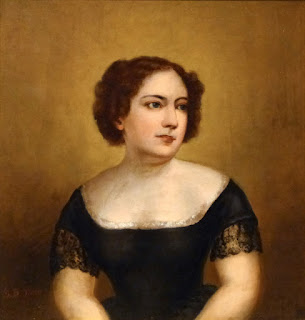