William Magear Tweed (1823 – 1878), widely known as "Boss" Tweed. American politician most notable for being the "boss" of Tammany Hall, the Democratic Party political machine that played a major role in the politics of 19th century New York City and State. At the height of his influence, Tweed was the third-largest landowner in New York City, a director of the Erie Railroad, a director of the Tenth National Bank, a director of the New-York Printing Company, proprietor of the Metropolitan Hotel, a significant stockholder in iron mines and gas companies, a board member of the Harlem Gas Light Company, a board member of the Third Avenue Railway Company, a board member of the Brooklyn Bridge Company, and the president of the Guardian Savings Bank.
Tweed was convicted for stealing an amount estimated by an aldermen's committee in 1877 at between $25 million and $45 million from New York City taxpayers through political corruption, although later estimates ranged as high as $200 million. Unable to make bail, he escaped from jail once, but was returned to custody. He died in the Ludlow Street Jail.

- "... his head, with its reddish-brown hair carved into a mustache and beard;"  https://www.americanheritage.com/house-tweed-built

- "It was William 'Boss' Tweed, the burly, red-haired leader of Tammany Hall..."  https://books.google.it/books… 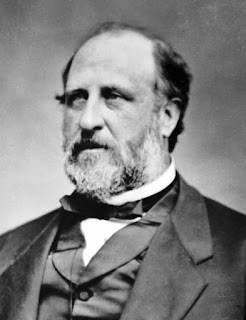