Laurence Hutton (1843 – 1904). American essayist and critic.
From 1886 to 1898 he was the literary editor of Harper's Magazine. He was one of the organizers of the Authors' Club and of the International Copyright League, and was a member of the Players' Club, the Princeton Club, and the Nassau Club. An ardent collector of literary curiosities, his collections are of remarkable interest. In 1892 he received the degree of A.M. from Yale University and an honorary Master of Art degree from Princeton University in 1897. From 1901 until his death in 1904, he was a lecturer of English at Princeton. 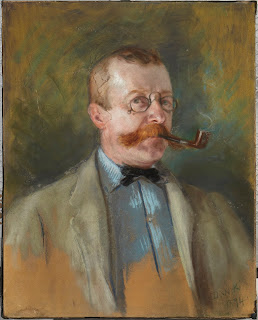