Rosa Valetti (1876 –1937), born Rosa Alice Vallentin. German actress, cabaret performer and singer.
In 1920, she founded the Café Grössenwahn ("Café Megalomania"), which has been recognized as one of the most important literary and political cabarets in 1920s Berlin. Café Megalomania was frequented by Expressionist writers, and the program of sketch comedy and political songs reflected Valetti's belief in the cabaret as an instrument of political and social criticism.
Rosa Valetti acted in film roles from 1911. Her age and sturdy mien ensured that she acted mostly in motherly roles, as in the 1925 film Die Prinzessin und der Geiger (The Princess and the Violinist), in which she played a 46-year-old grandmother. In Josef von Sternberg's 1930 film Der Blaue Engel (The Blue Angel) she plays the wife of the magician, Kiepert (Kurt Gerron). Valetti also appears briefly in Fritz Lang's 1931 classic M as the proprietor of an underworld cafe.

- "Rosa Valetti was a short fireplug of a woman, with a tough, pug-dog face, frizzy red hair..."  https://books.google.it/books… 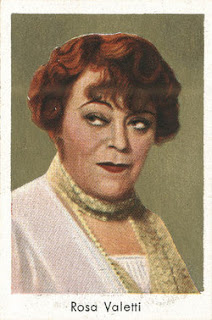 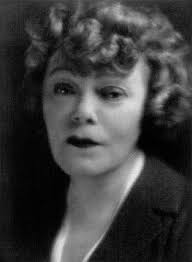