Nellie Hazeltine Paramore (1857 - 1884), known as the "Belle of St. Louis".
She was the only daughter of Captain William B. Hazeltine, a man who had made a large fortune in the mercantile world.
On the 2d of December, 1881, she was married to Mr. Frederick W. Paramore, a young railroad man of St. Louis, and a son of Mr. J. W. Paramore, who was president of the Texas and St. Louis Railroad. She died after giving birth to a son.
A play, called "Nellie of N'Orleans" was written about her life and starred Minnie Maddern Fiske.

- "Her red gold hair seemed to reflect some of the sun’s own glory..."  https://accessgenealogy.com/…/nellie-hazeltine-mrs-frederic…

- "... Guerin’s portrait of society belle Nellie Hazeltine was unable to “convey the exquisite tints of the violet eyes and Titian-red hair...”  https://www.ancestry.com/boards/thread.aspx… 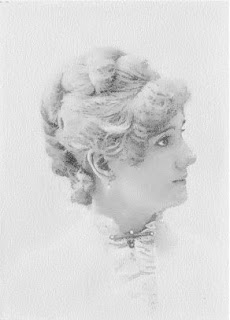