Harriet Rebecca Lane Johnston (1830 – 1903). First Lady of the United States during the presidency of her uncle, lifelong bachelor James Buchanan, from 1857 to 1861. Lane is among eleven women who have served as First Lady but were not married to the President, with most of the other women being relatives of widowed presidents.
She dedicated $400,000 (equivalent to $11,200,000 in 2018) to establish the Harriet Lane Home for Invalid Children at the Johns Hopkins Hospital in Baltimore, Maryland as a memorial to two sons who had died in childhood. In October 1912 the Harriet Lane Home officially opened. It was the first children’s clinic in the United States that was associated with a medical school. Eventually treating over 60,000 children a year, the Harriet Lane Home became a pioneer treatment, teaching, and research clinic.
She had an art collection based on European works which she left to the US government. The Smithsonian Institution called her the "First Lady of the National Collection of Fine Arts" after her collection was accepted into public ownership.

- "In appearance "Hal" Lane was of medium height, with masses of light, almost golden-colored hair."  https://en.wikipedia.org/wiki/Harriet_Lane

- "Her hair was of a golden- brown hue..."  https://archive.org/…/f…/famousamericanbe00peacuoft_djvu.txt

- "Her hair was a bright reddish-brown..."  http://www.firstladies.org/biographies/firstladies.aspx… 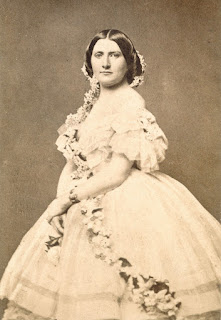