Thomas Lyon Hamer (1800 – 1846). United States Democratic congressman and soldier.
Before being admitted to the bar in 1821 he was a school teacher. He was an Ohio Presidential elector in 1828 for Andrew Jackson. He practiced law in Georgetown, Ohio and was elected to the Ohio House of Representatives in 1828, which body unanimously chose him as their Speaker in December 1829.
Following service in the House, Hamer was elected to the U.S. Congress. While serving as a congressman he nominated Hiram Ulysses Grant to be a cadet at West Point. Hamer incorrectly put on the nomination the name "Ulysses S. Grant" (assuming his middle name was his mother's maiden name of Simpson, the custom of the time) and the name stayed with the new cadet.
When the Mexican–American War broke out Hamer volunteered as a private in the Ohio Volunteers, and was quickly commissioned as a major in June 1846. Popular and well respected, Hamer was appointed a brigadier general of volunteers on July 1, 1846.
He died unexpectedly while stationed with the army at Monterrey on December 2, 1846. Upon Hamer's death, General Zachary Taylor exclaimed "I have lost the balance wheel of my volunteer army" and Lt. Ulysses S. Grant also lamented that the "U.S. has lost a future president." Grant later described him as "one of the ablest men Ohio ever produced."


- "Thomas L. Hamer was a man of middle height, of slender physique, with a head covered with a shock of bushy red hair, always neat and cleanly dressed..."  http://www.ohiogenealogyexpress.com/…/adamsco_bios_1900_h.h…

- "The red-haired congressman was normally a long winded talker..."  http://kkspc.com/argus/Hometown-Heroes.html

- "The red hair of Hamer and the dark skill of Corwin were familiar subjects of remark."  http://webcache.googleusercontent.com/search…

- "Unprepossessing in appearance, with an unwieldy mop of red hair, Hamer was infectiously vivacious, cheerful, generous and hospitable."  https://www.ancestry.com/boards/surnames.hamer/135/mb.ashx 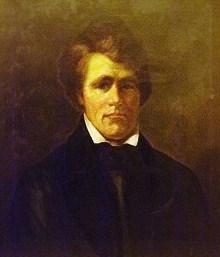