Sarah A. Bowman (c. 1813 – 1866). American innkeeper, restaurateur, and madam. Nicknamed "The Great Western", she gained fame, and the title "Heroine of Fort Brown", as a camp follower of Zachary Taylor's army during the Mexican–American War. Following the war she operated an inn in Franklin, Texas (now El Paso) before settling near Arizona City (now Yuma, Arizona). Over the course of her life she was married multiple times, often without legal record or the blessing of a priest.
She received no formal education, and is believed to have been illiterate due to her use of an X on business and census forms. Despite the inability to read and write, she was bilingual by her later years, with a priest near Fort Yuma noting she was the first American woman he had met fluent in Spanish.


- "Then imagine a six-foot-two-inch woman with blazing red hair and blue eyes appearing at the head of the line of soldiers..."  https://www.lindabroday.com/sarah-bowman-the-great-western/

- "She had long red hair, carried pistols and took in orphan children. They called her the Great Western, after the largest steamship afloat at the time."  https://wlna-webservice.gannettdigital.com/…/24.3.57/iphone…

- "Sarah was big, strong minded and very attractive with reddish hair and an hourglass figure."  http://www.tombstonetimes.com/stories/greatwestern.html

- "Over 6 feet tall and weighing 200 pounds, the buxom, red-haired beauty earned the reputation as a hard-working, astute businesswoman even though she could neither read nor write."  https://saddlebagnotes.com/…/article_0f8d3839-12b7-5aac-9ed… 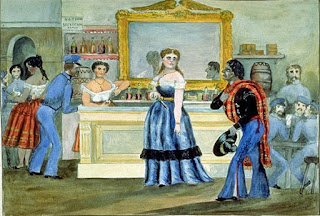