The Bowl (also Chief Bowles, ca. 1765 – 1839). One of the leaders of the Chickamauga Cherokee during the Cherokee–American wars. He served as a Principal Chief of the Cherokee Nation–West and was a leader of the Texas Cherokees.
His mother was Cherokee and his father was a Scottish trader.

- "Emmet Starr, an early historian of the Cherokee, describes Bowles as "being decidedly Gaelic in appearance, having light eyes, red hair, and somewhat freckled."  https://en.wikipedia.org/wiki/The_Bowl_(Cherokee_chief) 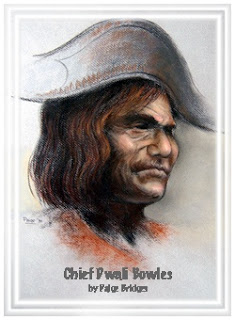