Hudson Whittaker (born Hudson Woodbridge, 1903 – 1981), known as Tampa Red. American Chicago blues musician.
Tampa Red is best known as a blues guitarist who had a distinctive single-string slide style. His songwriting and his bottleneck technique influenced other leading Chicago blues guitarists, such as Big Bill Broonzy, Robert Nighthawk and Muddy Waters, and many others, including Elmore James and Mose Allison. In a career spanning over 30 years he also recorded pop, R&B and hokum songs. His best-known recordings include "Anna Lou Blues", "Black Angel Blues", "Crying Won't Help You", "It Hurts Me Too", and "Love Her with a Feeling".


- "... he moved to Chicago, Illinois, and began his career as a musician, adopting the name "Tampa Red" from his childhood home and red hair."  https://www.last.fm/music/Tampa+Red/+wiki

- "He grew up in Tampa, florida, and that and the fact that he had red hair gave him his nickname."  https://books.google.it/books… 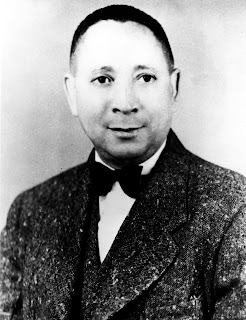