Søren Aabye Kierkegaard (1813 - 1855). Danish philosopher, theologian, poet, social critic and religious author who is widely considered to be the first existentialist philosopher. He wrote critical texts on organized religion, Christendom, morality, ethics, psychology, and the philosophy of religion.
His early work was written under the various pseudonyms that he used to present distinctive viewpoints and to interact with each other in complex dialogue.
Since he wrote in Danish, the reception of his work was initially limited to Scandinavia, but by the turn of the 20th century his writings were translated into French, German, and other major European languages. By the mid-20th century, his thought exerted a substantial influence on philosophy, theology and Western culture.


- "Thus, to base my hopes for eternity upon my red hair, believing that this color is particularly pleasing to the gods, is the lowest form of paganism, totally lacking in inwardness."  https://books.google.it/books… 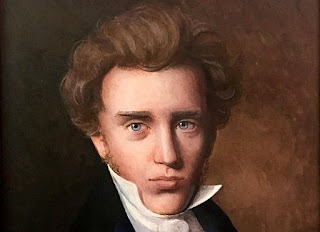