Ahmad Ibn Abolhasan Jāmi-e Nāmaghi-e Torshizi (1048 - 1141), better known as Sheikh Ahhmad-e Jami or simply Ahmad-e Jam. Persian Sufi, Sufi writer, mystic and poet.
After living in seclusion for more than twenti years, at the age of forty he returned to society to guide the people and make wine-drinkers and sinners to repent. At first he was not appreciated by the people, but after several miraculous healings, his reputation spread and he attracted some followers. He won many converts from the villages outlying Jâm. Shaykh Ahmad's activity therefore stretched across a territory that triangulates the modern borders of eastern Iran, northern Afghanistan and southern Turkmenistan.

- "Medieval accounts describe him as having red hair, a wine-colored beard and dark-blue eyes."  https://en.wikipedia.org/wiki/Sheikh_Ahmad-e_Jami 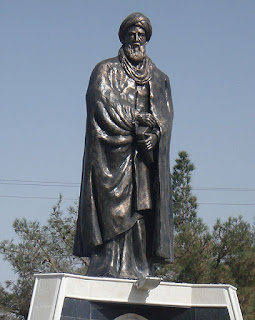