Edmond-Charles Genêt (1763 – 1834), also known as Citizen Genêt. French envoy to the United States during the French Revolution. His actions on arriving in the United States led to a major political and international incident, which was termed the Citizen Genêt Affair. Because of his actions, President George Washington asked the French government to recall him. During this time, the government in France changed and an arrest warrant was issued for Genêt. Fearing for his life, he asked for asylum in America, which was granted. Genêt stayed in the United States until his death.


- "Red-haired, blue-eyed and broad-shouldered, Genêt had been sent in his early twenties as chargé d'affaires to the Russian court of Catherine the Great."  https://books.google.it/books…

- "Short and ruddy, the thirty-year-old diplomat had flaming red hair, a sloping forehead and an aquiline nose."  https://books.google.it/books… 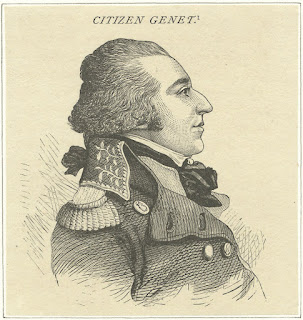