Leonard Patrick "Red" Kelly (1927 – 2019). Canadian professional ice hockey player and coach. He was also a Liberal Member of Parliament for the Toronto-area riding of York West from 1962 to 1965, during which time he also won the Stanley Cup—twice—while actively playing for the Toronto Maple Leafs.
In 2017, Kelly was named one of the '100 Greatest NHL Players' in history.

- "Red Horner had red hair. I had red hair... One time, I scored eight goals or some dang thing in one of the games and they nicknamed me. Because of the red hair, they started calling me 'Red.' "  https://www.hhof.com/htmlSpotlig…/spot_oneononep196903.shtml


- "Kelly was born Leonard Patrick Kelly on July 9, 1927 in Simocoe, Ont., but earned the nickname Red for his bright red hair."  https://toronto.citynews.ca/…/leafs-legend-red-kelly-passe…/

- "The only thing the old footage can't show is the striking red hair on top of his head, matching the red sweater he wore in the first part of his remarkable career. It was why everyone called Leonard Patrick Kelly "Red."  https://www.nhl.com/player/red-kelly-8447149 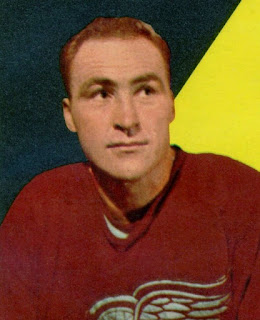