Charles Herbert "Red" Ruffing (1905 – 1986). American professional baseball player. A pitcher, he played in Major League Baseball (MLB) from 1924 through 1947. He played for the Boston Red Sox, New York Yankees, and Chicago White Sox. Ruffing is most remembered for his time with the highly successful Yankees teams of the 1930s and 1940s.
Ruffing was a member of six World Series championship teams with the Yankees. He also appeared in six MLB All-Star Games. He was inducted into the Baseball Hall of Fame in 1967. The Yankees dedicated a plaque to Ruffing in Monument Park in 2004.


- "Charley, nicknamed “Red” because of his hair color, was one of five children of German immigrants."  https://www.cooperstowncred.com/hall-of-famer-red-ruffing-…/

- "The nickname “Red” came from his hair color, but his family called him Charley and his wife called him Charles. He signed some autographs “Chas. ‘Red’ Ruffing.”  https://sabr.org/bioproj/person/7111866b

- "One had red hair and was named Red Ruffing..."  https://books.google.it/books… 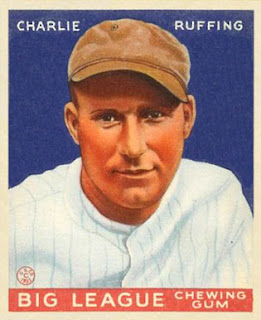