William "Red" Holzman (1920 – 1998). American professional basketball player and coach. He is probably best known as the head coach of the New York Knicks of the National Basketball Association (NBA) from 1967 to 1982. Holzman helped lead the Knicks to two NBA Championships in 1970 and 1973, and was inducted into the Basketball Hall of Fame in 1986. In 1996, Holzman was named one of the Top 10 Coaches in NBA History.

- "Everyone knew William Holzman as “Red” on account of his hair—except for his Yiddish-speaking family, in the Brownsville section of Brooklyn, which called him “Roita.”  https://www.tabletmag.com/jewish-news-and-po…/…/magic-number

- "Holzman was then about seventy-five years old, tipically natty in a dark blue suit and red tie, his red hair turned gray..."  https://books.google.it/books… 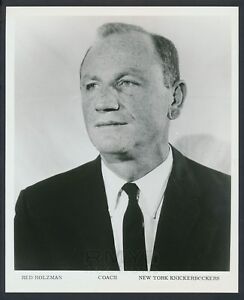