Urban Clarence "Red" Faber (September 6, 1888 – September 25, 1976) was an American right-handed pitcher in Major League Baseball from 1914 through 1933, playing his entire career for the Chicago White Sox.
Faber won 254 games over his 20-year career, a total which ranked 17th-highest in history upon his retirement. At the time of his retirement, he was the last legal spitballer in the American League. He was inducted into the Baseball Hall of Fame in 1964.

- "Nicknamed Red because of the flaming color of his hair in his youth, Faber was a mature 26 years old when he reached the majors in 1914."  https://entertainment.howstuffworks.com/red-faber-hof.htm


- "Faber's obvious nickname was a result of his auburn hair."  https://www.psacard.com/…/autograph-expert-analysis-signing…

- "The red-haired Faber apparently had a sporadic and unspectacular high-school baseball career."  https://books.google.it/books… 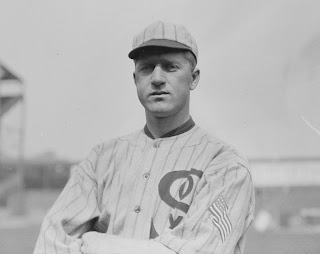