John M. "Red" Pollard (1909 – 1981). Canadian horse racing jockey. A founding member of the Jockeys' Guild in 1940, Pollard rode at racetracks in the United States and is best known for riding Seabiscuit.

- "It was here where John Pollard got his nickname Red due to his bright red Irish hair."  http://redpollardproject.weebly.com/personal-life.html#

- "America’s iconic jockey, John Pollard, whose moniker “Red” Pollard was known for his flaming red hair and was taller than most jockeys."  https://www.canadianhorseracinghalloffame.com/…/john-red-p…/


- "Red Pollard's real name was actually Harry, but is nickname is Red because of his fiery red hair."  https://www.wattpad.com/250349438-the-short-blog-of-a-weird… 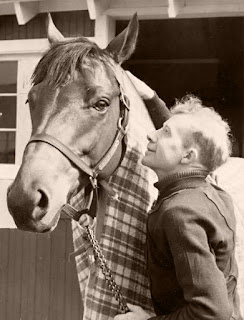