Paul Neal "Red" Adair (1915 – 2004). American oil well firefighter. He became notable as an innovator in the highly specialized and hazardous profession of extinguishing and capping oil well blowouts, both land-based and offshore.
He founded Red Adair Co. Inc. in 1959, and over the course of his career battled more than 2,000 land and offshore oil well, natural gas well, and similar spectacular fires.
Adair retired in 1993, and sold The Red Adair Service and Marine Company to Global Industries. His top employees (Brian Krause, Raymond Henry, Rich Hatteberg) left in 1994 and formed their own company, International Well Control (IWC).

- "Mr. Adair's hair is no longer red; it is more of a sandy gray these days. But the color has become his trademark."  https://www.nytimes.com/…/red-adairs-oil-daredevils-are-cow…

- "His red hair - and insistence on outfitting everything from his firefighting gear to his office furniture in that color - made for an easy nickname."  https://www.chron.com/…/Send-for-Red-Adair-Deer-Park-blaze-… 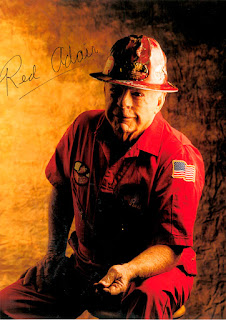