Emil "Red" Sitko (1923 – 1973). American football player.
Upon coming out of service in World War II, he enrolled at Notre Dame as a 23-year-old freshman. He led his team in rushing all four years and his career average was 6.1 yards a try. In 1949, he also led the team in kickoff returns, averaging 22 yards. He made the All-America teams of the Sporting News and the Football Writers Association of America in 1948 and was unanimous All-America in 1949. Emil also finished eighth in the 1949 Heisman Trophy voting behind teammate Leon Hart. Sitko still stands seventh on Notre Dame's career rushing charts.
Sitko played three seasons in the NFL for the San Francisco 49ers and the Chicago Cardinals before retiring and returning to his hometown to work in the auto sales business.


- "He earned the nickname of "Red" due to his red hair."  https://en.wikipedia.org/wiki/Emil_Sitko 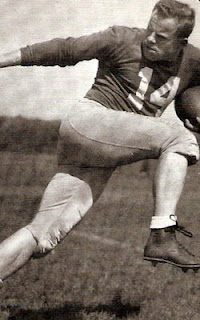