Wade Hampton "Red" Killefer (1885 – 1958). American outfielder and second baseman in Major League Baseball who played seven seasons with the Detroit Tigers (1907–1909), Washington Senators (1909–1910), Cincinnati Reds (1914–1916), and New York Giants (1916).
In 467 major league games, Killefer was a versatile player who logged time at every position except pitcher: 135 games as a center fielder, 135 games as a left fielder, 129 games as a second baseman, 27 games as a right fielder, 11 games as a third baseman, 8 games as a shortstop, 3 games as a catcher, and 2 games as a first baseman.
Killefer is noted as being the first ever batter at Wrigley Field, as a visiting team batter for the Cincinnati Reds. After his playing career ended, Killefer was a minor league manager for 25 years, from 1917 to 1941.


- "Although there isn't a strong correlation between hair color and personality, it's fair to say that the stereotypical redhead is hot-tempered, fiery and passionate. With his carrot-topped thatch, Wade Killefer personifies this description and was a natural to be called "Red" from birth."  https://sabr.org/bioproj/person/1939cba2 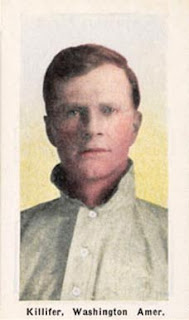