Edward "Red" Jones Borom (1915 – 2011). American Major League Baseball player who played two seasons and won a World Series ring with the Detroit Tigers in 1945. Born in Spartanburg, South Carolina, Borom was 28 years old before he made it to the big leagues. He only played one full season in the major leagues, and that season was spent with the 1945 World Series champion Detroit Tigers. Borom also played professional and semi-pro baseball for over 15 years from the mid-1930s into the 1950s.

- "Like most players with this nickname, Borom was a redhead."  https://www.vintagedetroit.com/…/the-nickname-game-the-194…/ 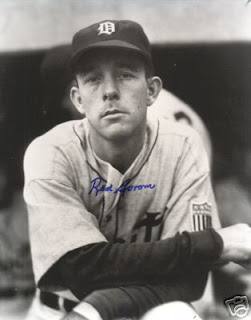