Albert "Ginger" Goodwin (1887 – 1918)- English-born coal miner who found work in the Cumberland mines, arriving on Vancouver Island in late 1910. Goodwin was disgruntled by the working conditions and management's ubiquitous disregard of all labour factions. Zealous for change, Goodwin became an advocate for workers rights, organizing and promoting the proliferation of trade unions. Goodwin increased in stature to become a highly prominent leader of the social movement that organized labour, but died rather suddenly under highly controversial circumstances that have not been settled to this day. The widely held belief was that Goodwin was murdered in an attempt to stifle collective bargaining; his death inspired the 1918 Vancouver general strike on August 2, 1918, Canada's first General Strike ever. This strike was a precursor to the Winnipeg General Strike of 1919, a defining moment in Canadian labour history.

- "Known by his friends as ‘Ginger’, Albert was slight, and short, with a shock of red hair."  https://minersmemorial.ca/ginger-goodwin/

- "On a spring day in England in 1887, a baby with red hair was born. His name was Albert Goodwin, but his family called him “Ginger.”  https://opentextbc.ca/…/cha…/the-shooting-of-ginger-goodwin/ 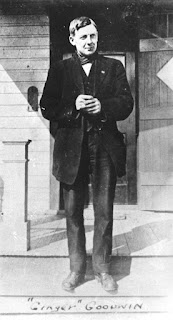