Alphonso J. "Al" Jennings (1863 – 1961). Attorney in Oklahoma Territory who at one time robbed trains. He later became a silent film star and made many appearances in films as an actor and technical adviser.
In 1913 he wrote Beating Back, a novel loosely based on his outlaw life. This novel portrayed the law as persecutors of the innocent and Jennings as an honorable lawbreaker who possessed immense skills in horsemanship and marksmanship. To coincide with this novel, The Saturday Evening Post wrote a series of interviews with Jennings that perpetuated the same messages as his novel. He re-created one of his bank robberies in the 1908 film The Bank Robbery.
Jennings moved to Oklahoma City in 1911 and became active in politics. In 1912 he won the Democratic nomination for Oklahoma County attorney, but he lost the general election.
Retiring from law and politics, Jennings moved to California and worked in the motion picture industry making Westerns. A film biography of him was made in 1951, Al Jennings of Oklahoma, with Dan Duryea in the title role.


- "Although some of the gang wanted to surrender, Mrs. Harless said the short bandit with the red hair - that was Al - said he'd rather die first."  https://www.coopertoons.com/caricatures/aljennings_bio.html

- "He had a head of fiery red hair and a dynamic way of speaking."  https://books.google.it/books…

- "Al Jennings’s distinctive red hair made him easily recognizable even when masked, and he was captured in 1897."  http://fayllar.org/clara-bow-in-mantrap-victor-fleming-1926… 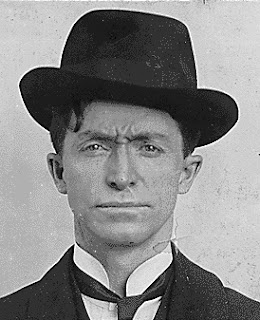