Augustus Saint-Gaudens (1848 – 1907). American sculptor of the Beaux-Arts generation who embodied the ideals of the American Renaissance. Raised in New York City, he traveled to Europe for further training and artistic study, and then returned to New York, where he achieved major critical success for his monuments commemorating heroes of the American Civil War, many of which still stand. Saint-Gaudens created works such as the Robert Gould Shaw Memorial on Boston Common and grand equestrian monuments to Civil War Generals: General John Logan Memorial in Chicago's Grant Park and William Tecumseh Sherman at the corner of New York's Central Park.
Saint-Gaudens also created Classical works such as the Diana, and employed his skills in numismatics. Most notably, he designed the $20 Saint Gaudens Double Eagle gold piece (1905–1907) for the US Mint, considered one of the most beautiful American coins ever issued as well as the $10 "Indian Head" gold eagle, both of which were minted from 1907 until 1933. In his later years he founded the "Cornish Colony", an artistic colony that included notable painters, sculptors, writers, and architects.


- "Born in Dublin of an Irish mother and a French father, the red haired Saint-Gaudens, when only six months old was brought to the United States to escape the horrors of the Irish potato famine of 1848."   https://buffaloah.com/a/elmwd/1285/s-g/index.html

- "They became fast friends, sharing many things beyond their red hair."  https://books.google.it/books… 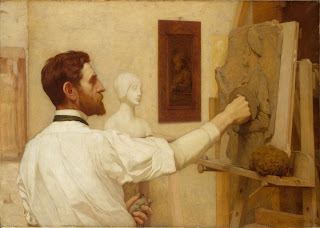