Emily Donelson (1807 – 1836). Niece of Rachel Donelson Jackson, the wife of U.S. President Andrew Jackson. She served as White House hostess and de facto First Lady of the United States.
On September 16, 1824, seventeen-year-old Emily married Andrew Jackson Donelson. Donelson was Emily's first cousin and a ward of their mutual uncle and aunt, Andrew and Rachel Donelson Jackson. The couple had four children.
After the death of his wife, Andrew Jackson asked Emily to take over all the responsibilities of the White House hostess, which she did with the aid of her niece Mary Ann Eastin.
She arrived in Washington at the age of 21. Her husband, A. J. Donelson, served as President Jackson's private secretary.

- "Emily has been described by her contemporaries as a Titian-haired beauty..."  https://books.google.it/books… 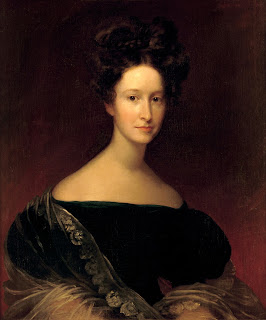