Erastus "Deaf" Smith (1787 – 1837). American frontiersman noted for his part in the Texas Revolution and the Army of the Republic of Texas. He fought in the Grass Fight and the Battle of San Jacinto. After the war, Deaf Smith led a company of Texas Rangers.
He worked closely with Henry Karnes and at the Alamo he served as a courier to William B. Travis.

- "He was sturdy, red-headed and something of a loner because he had been born with limited hearing."  https://books.google.it/books…

- "Occasionally, he blended into Mexican troop gatherings, hiding his red hair under a cap."  https://books.google.it/books… 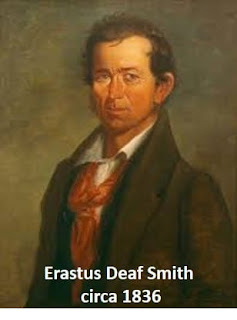