James Butler Hickok (1837 – 1876), better known as "Wild Bill" Hickok. Folk hero of the American Old West known for his work across the frontier as a drover, wagon master, soldier, spy, scout, lawman, gunfighter, gambler, showman, and actor.
Hickok was born and raised on a farm in northern Illinois at a time when lawlessness and vigilante activity were occurring because of the influence of the "Banditti of the Prairie". Hickok was drawn to this ruffian lifestyle and headed west at age 18 as a fugitive from justice, working as a stagecoach driver and later as a lawman in the frontier territories of Kansas and Nebraska. He fought and spied for the Union Army during the American Civil War and gained publicity after the war as a scout, marksman, actor, and professional gambler.
In 1876, Hickok was shot from behind and killed while playing poker in a saloon in Deadwood, Dakota Territory (present-day South Dakota) by Jack McCall, an unsuccessful gambler. The hand of cards which he supposedly held at the time of his death has become known as the dead man's hand: two pairs, aces and eights.
While Hickok claimed to have killed numerous named and unnamed gunmen in his lifetime, according to Joseph G. Rosa, Hickok's biographer and the foremost authority on Wild Bill, Hickok killed only six or seven men in gunfights.


- "Photographs of Hickok appear to depict dark hair, but all contemporaneous descriptions affirm that it was red."  https://en.wikipedia.org/wiki/Wild_Bill_Hickok

- "Over six feet tall, blue-eyed, long-nosed and mustachioed, he is as lithe as a tiger, and blessed with wavy auburn hair that he wears shoulder-length, like a rock star."  https://www.realclearbooks.com/…/how_wild_was_wild_bill_hic…

- "Charismatic and Cavalier-like, he wore his auburn hair shoulder lenght and sported a straw-colored mustache."  https://books.google.it/books…

- "He was a 6ft 3in tall, wide shouldered, handsome man with auburn hair worn long and down to his shoulders in the fashion of a Plainsman and contemporaries speak of his clear grey eyes that "could see right through you".  https://www.thehistoryherald.com/…/Civil-W…/wild-bill-hickok

- "But a Kansas editor who noted his 'fine auburn hair' and a writer of the St. Louis Republic who wrote that 'his hair was auburn in hue...' were closest to the color the family remembers. There also exist a lock of his hair... which is 'judged to be auburn'."  https://books.google.it/books… 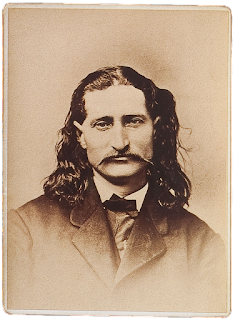