Moses Embree Milner (1829 – 1876) also known as "California Joe". American miner and frontier scout.
In 1846 during the Mexican–American War he began working as a scout for General Stephen W. Kearny and Colonel Alexander W. Doniphan. Following the war he married Nancy Watts and moved to California where he became a gold prospector and was then known as "California Joe".
In 1866, California Joe was a scout based in Kansas at Fort Riley and later out of Fort Harker. Then in 1868, Milner was named Chief of Scouts for George Armstrong Custer in Fort Hays where he became acquainted with Wild Bill Hickock and Texas Jack Omohundro.
In October 1876, while at Fort Robinson, Nebraska he was shot in the back by Thomas Newcomb, whom he had publicly accused of killing his friend Wild Bill Hickok three months earlier.


- "The adventurous young man was described as a colorful character who was large in stature, with unkempt long-hair and a heavy red beard..."  https://www.legendsofamerica.com/california-joe/

- "California Joe of the ragged red hair and beard, and the rope-tied old coat..."  https://books.google.it/books…

- "And at the last sauntered in a big-nosed, bluish-eyed man, with much brick-red hair and whiskers mingling, whose title was California Joe."  https://books.google.it/books… 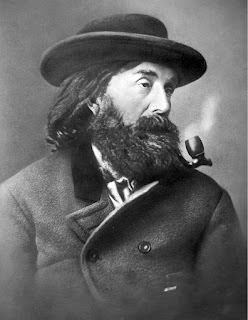